The great warrior Major Aziz Bhatti born in 10 September 1928. His family is migrated to the village of Pakistan when this great country came into being. He took participate in the army in 1950. He belongs to Rajpoot family father’s name was Master Abdullah Bhatti. He has six siblings from which he has 4 brothers and 2 sisters. Due to his extraordinary skills every one is known about Major Aziz Bhatti he always be stand up in front of his group as a protective layer. Among a batch of 300 officers he is awarded with the sword of honor which makes him more remarkable and a model for others. He also be awarded with the Norman medal. Here you can get details about Speech on Major Aziz Bhatti in English / Short Story.

Liaqat Ali khan gives these awards to the legendary Major Aziz Bhatti. Many challenges occur for Pakistan major challenge was the aggression of Indian Army. Many wars fought against India for taking Kashmir, but failed in this mission which makes Indian more chances of wars, but our brave army fought all the wars and make a remarkable history against India. Indian army attacks on Pakistan in 1965 from Sialkot thinking that they have the spirit to defeat Pakistan but they never know that they dig their own graves. 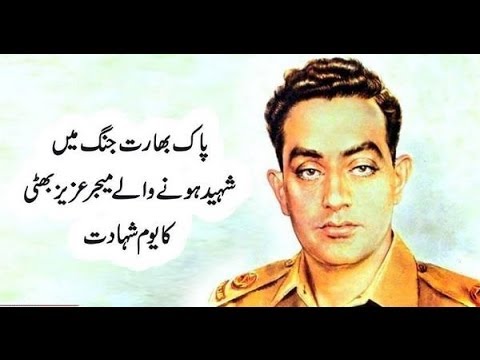 He positioned his army or gunners to shell Indian army position. Major Aziz Bhatti keep himself in front of every single pistol to protect all his companions and track the enemy position. He attacked on many tanks of Indian army and destroy many but don’t know from where a single tank attack on him and Major Aziz Bhatti embraced shadad on 11 September 1965. Major Aziz Bhatti buried in his village but his spirit lives in the whole world and become a role models for other to be brave and devote the life for the native land.