Honorable chief guest, Respected Audience, and my dear fellows! Assalam-u-Alikum! I am glad to join you today on the day of independence. Dear audience!  I am here to make you remember the days of Independence, The day of 14 August when the Islamic Republic of Pakistan came into being. Every year, August 14 is celebrated as Independence Day in Pakistan. If you are looking for the Speech on 14th August Pakistan Independence Day then you are in the right place.14 August is one of the most important days present in the history of Pakistan. This day has huge importance because on this day Pakistan became a separate country in 1947 by the day and night hard work of our beloved Quaid, Quaid e Azam Muhammad Ali Jinnah.

The Muslims of the sub-continent were living the life of slaves and they wanted a separate homeland where they can pray for their religious obligation without any interference. On the day of 14th of August in 1947, there was the 27th of Ramadan which is also the holiest night and according to the Muslim’s belief, it is equal to eighty thousand nights. The Pakistani nation is a very open-hearted nation that celebrates this day with great devotion because this day reminds them about independence day. On this day our nation celebrates this day and there is a public holiday on this day. Today we are living happily and enjoying freedom only due to the hard work and struggle of our leaders like Muhammad Ali Jinnah, Allama Iqbal, and many others, who sacrificed their everything to get a separate country.

This day is a very important day because according to the English calendar we got independent on this day but according to the Islamic calendar, there was the 27th of Ramadan on that day in 1947. Everyone celebrate this day according to their own way. Everyone became happy these days, there are public seminars and shows in educational institutes and public departments. The nation of Pakistan also prays special prayers on this day for the prosperity of this well-reputed country. Students and other people recite Holy Quran on this day and pray special nawafils on this day. People also apportion sweets and cakes on this day.

This national festival is celebrated with great enthusiasm all over the country. On this special occasion, rich tributes are paid to the freedom fighters, who sacrificed their lives and fought to free their motherland from the clutches of the oppressors – the British who ruled the country.

I remember the days, ladies and gentlemen! the leadership abilities of a great Lawyer of the subcontinent.  Yes, you are right, I am talking about Quaid-e-Azam Muhammad Ali Jinnah. Let us salute the father of the nation for his great efforts for the establishment of Pakistan, It is because of the great Quaid that we are living in an independent country, we are no longer the slaves of Hindus and British people, so once again I salute the great Quaid for his sincere efforts. Ladies and Gentlemen! I remember those glorious days. 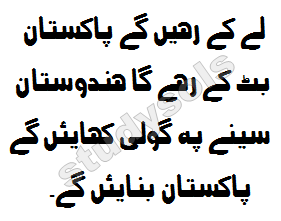 Those days and 65 years later in the present days, when I make a comparison between these I find a big difference. When I compare the people of those times with today, I am surprised to see that people nowadays are divided into different sects. They represent themselves by their castes and sects. We need to develop a system today so let’s built a better nation because millions of our brothers are helpless, they need our help. Let’s discover the secrets of a satisfying life. In previous times, people who were not so wealthy but they were happier and more content than the people of the modern age.

The reason behind that was their simplicity and love for each other. They were not selfish and greedy like the men of the modern age. The wealthy people used to distribute their wealth to the poor person and Islam is all about that. Being a Muslim and Pakistani, We need to develop a system of justice and equality in all parts of our society. This is the reason that Islam emphasizes building a system where there is justice and the life of a common man is the same as the life of a king.

As Pakistani, we need to realize that Pakistan was established in the name of Islam. We need to show unity and brotherhood. We need to act upon Quaid saying (UNITY, FATH & DISCIPLINE), we need to help others and make sincere efforts to make Pakistan the real Pakistan as Quaid-e-Azam thought. Let’s remove corruption and terrorism from our country. For this, we need to take a step ahead to make Pakistan the homeland of prosperity. I request the youth of our country to save Pakistan from these social crimes. Let’s take Pakistan to another level of glory. We should try to lead the mission of Quaid. In the end, let’s Pray for Pakistan, let us pray that our country would make progress like other countries of the world.

Today we have forgotten the basic purpose behind the creation of Pakistan. This is not the same Pakistan that Allama Iqbal has dreamed about. This is not the same Pakistan for which Quaid e Azam has sacrificed his everything even his life. We have to realize the true meaning of this country. Also, we should not divide into parties on the basis of caste, creed, or province. We have to bring brotherhood so that we can work together for the prosperity of our beloved country and can face our major enemies like terrorists and others.