The model is as follows:
When a citizen goes to a government office to avail a service (eg, driving license, character certificate, property registration), the office records his or her mobile number along with the transaction details. This data is passed on to local officers and to call center through an online data entry form or through SMS. The local officers call some of the citizens. The call center sends SMS messages to citizens and also calls a much greater percentage to inquire about quality of service received. 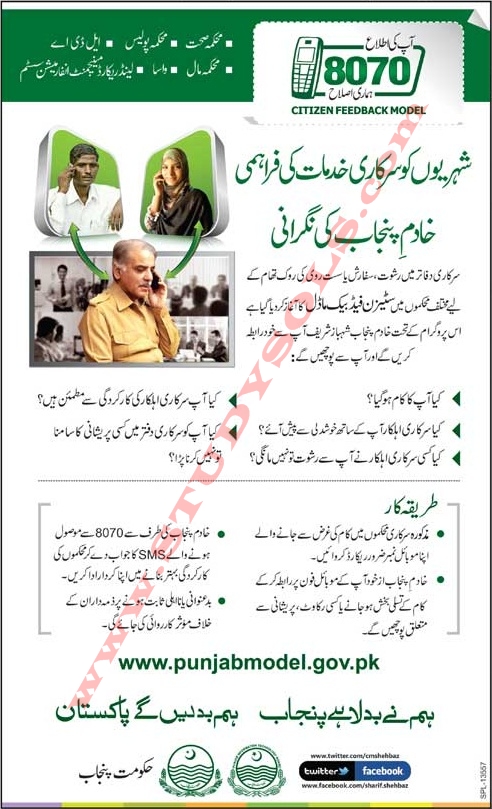 Thus the state instead of passively waiting for the citizen to file a complaint, if there is indeed cause of such a grievance, proactively engages the citizen and gets his feedback to improve service delivery and especially, weed out corrupt government officials. The Punjab Government in partnership the World Bank Country Office, Innovation Fund Challenge of the World bank Group conducted between their country offices. This proposal is one of the 13 innovative proposals from among 170 received from all the country offices. The World Bank wrote that it looks forward to partnering with the Punjab Government and Learning from its experience to develop, scale and institutionalize this proactive outreach to citizens for improved government.

The Punjab Government, with the active interest of the Chief Minister, started implementing the Punjab Model in April 2012 in six distracts. After substantial positive feedback, it has recently set cell in the Chief Minister’s Secretariat, developed a pilot project, and contracted a call center to scale up and institutionalize the idea. The project is now running in all districts of Gujranwala and Bahawalpur divisions, in addition to six other districts. As of now the project is operational in a total of fifteen districts that can be seen on the list below:

For the further Information about the Shahbaz Sharif Call Feedback System For Complaint in Punjab you keep stay with us on Studysols and is you have any query or want to ask any thing you can comment us here in given below comment section.