Ranks of Pakistan Navy Officers and Sailors with Badges in Order

Basically, when individuals join Pakistan Navy they are getting training at naval academies. They can get such as environment where they groom themselves professionally. In fact, morally, educationally, mentally, physically. However, the personality traits of individuals are developed which result in proficient Naval Officers equipped with the highest ideals of loyalty, honor, courage, dedication.

Pakistan Navy offers career and job opportunities for males as well as females in Pakistan. There are different ranks offered to individuals in Pakistan Navy. Each Naval rank is given to a responsible individual who manages his duty very well. You can join Pak Navy as a professional officer, as a proud sailor,, and as a competent civilian. Two times a year the advertisement for various posts is announced and then after selection tests and successful training, you can be a part of the Pakistan navy and should feel proud.

Once you become a part of the Navy then you can play your role efficiently and increase your rank. For that, it is necessary that you should have enough information about naval ranks offered by this great force of Pakistan. Have a look below to get complete information about naval ranks. You can join the Navy as a civilian officer in grades 16 to 19 in different divisions. 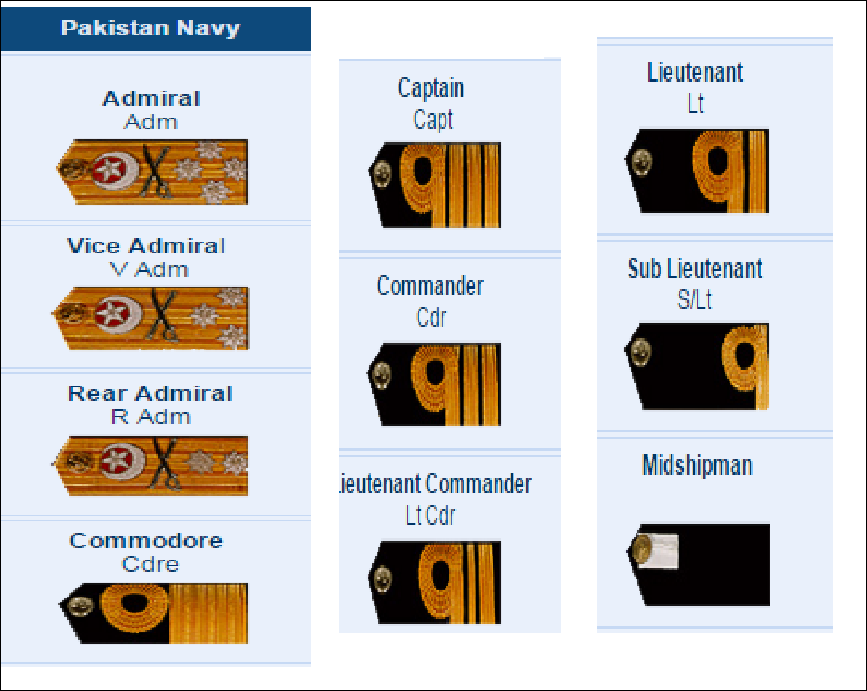 Here are giving below the ranks offering to the lucky ones by joining Pak Navy. A rank having 4 stars is the highest rank in the Pak navy. The Chief of Naval Staff (CNS), by statute a four-star admiral, is appointing by the President with the consultation and confirmation needed from the prime minister of Pakistan. Being a CNS is a big responsibility for a person because he has the top rank.