Pakistan is an under-develop country which is on his way to development. Province Wise Literacy Rate in Pakistan is56.4% in 2017 which is very low as compare to the successful countries present in the world. When we deeply examine the literacy percentage in Pakistan than we come to know that it is not equal in all provinces. There are many reasons behind the discrimination of literacy rate in provinces of Pakistan. When we divide the literate persons according to the province wise then we come to know that, from 56.4% literate persons of Pakistan approximately half persons belongs to Punjab province. Punjab has considered the most advanced province of Pakistan because in this the literacy rate is higher than the other province. Let’s have a deep discussion over the literacy rate, and causes of low literacy rate province wisely.

If we talk about the most literate province then Punjab is one top because the government of Punjab spends more part of its GDP as compared to others. Moreover, this government has specials scheme to influence the students of Pakistan to get an education. Govt. of Punjab has been providing free of cost education in the province and providing them different merit and need-based scholarships. Besides this, the educations institutes are more in number in Punjab. 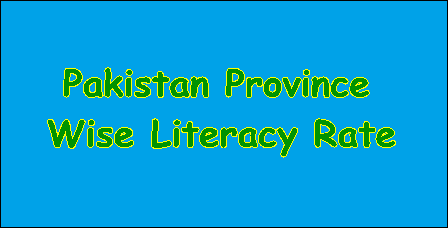 Sindh stands at 3rd place in the list of education rates in Pakistan. It was in 2nd place but due to the negligence of the Sindh government, it has become the third province in Pakistan where the literacy rate is low as compared to Punjab and Khyber Pakhtunkhwa. There are many reasons behind illiteracy. One of the biggest reasons is that the government spends less GDP on education. Moreover, most areas are backward and the people are less aware of the benefits of education.

Baluchistan is considered as the backward province of Pakistan according to the literacy rate. There are only a few institutes are present there and the government spends a minor part of GDP. In this province mostly people don’t want to provide education to their children because if they provide then how can they earn to survive in the present century. The government of Pakistan also provides fewer scholarships to the students of Baluchistan too.

If we want to increase the literacy rate in Pakistan then the government should have to spend equally on each province in Pakistan. Illiteracy is the biggest reason for the country’s poorness and backwardness.