Ali bin Abu Talib (A.S.) was the cousin and son-in-Law of Prophet Muhammad (pbuh). It is outside the scope of this presentation to record the numerous achievements and merits of ImamAli (A.S.). His exalted personality is such that even the most learned scholars are at a loss to fathom his greatness.

The miraculous circumstance of ImamAli’s birth givesus an indication of his unique position in relation to Allah (s.w.t.)*. Imam Ali was born in 600A.D., on the 13th of Rajab, within the holy precincts of the Kaba, the house of Allah in Mecca, Saudi Arabia. His mother, Fatima bint e Asad, experienced labor pains and walked towards the Holy Kaba. Its wall miraculously split, she entered the sanctuary, and the gap sealed itself behind her. Onlookers panicked and rushed to enter it, but could not unlock the door. She emerged three days later, after the baby was born. The Holy Prophet
(pbuh) was the first person besides Ali’s mother to hold the newborn in his arms, and when Ali opened his eyes, it was the face of the Holy Prophet (pbuh) that he first saw. In the history of the Kaba, this is the only known instance of a person being born within
its holy precincts. His ancestry: Ali’s father was Hazrat Abu Talib, the chief of the Hashemite tribe and an uncle of the Holy Prophet (pbuh). Thus, both of Imam Ali’s parents were of noble ancestry, belonging to the tribe of Banu Hashim.

The idol worshipers of Mecca had plotted to kill Prophet Muhammad (pbuh) in order to prevent his message of monotheism from
spreading. The Holy Prophet (pbuh) was informed by Allah (s.w.t.) of the plot, and decided to make Hijra (migration), for the sake of Allah (s.w.t.) to the city of Medina, so as to carry on his mission. He asked Imam Ali, his young cousin, to sleep in his bed in
order to distract and confuse the assassins and allow him time to escape. Imam Ali gladly accepted this responsibility, risking his life so that the Prophet’s life would be saved. Imam Ali slept soundly, surrounded by the drawn swords of the Prophet’s blood-thirsty
enemies. When asked later on in what state he had spent that night, Imam Ali replied that he had never slept so peacefully before in his life! Allah was so pleased with this exemplary act of sacrifice that He revealed the following verse of the Qur’an: “And there is the type of man who gives his life to earn the pleasure of Allah; and Allah is full of kindness to (His) servants.”

During the ministry of the Holy Prophet (pbuh), two events in particular shed light on the unique distinction and position of Imam Ali. One occurred at the very beginning of the Holy Prophet’s (pbuh)mission, and the other was near the end of the Prophet’s life. One is The Feast of Dhul ’Asheera and Second is The event of Ghadir-e-Khum. 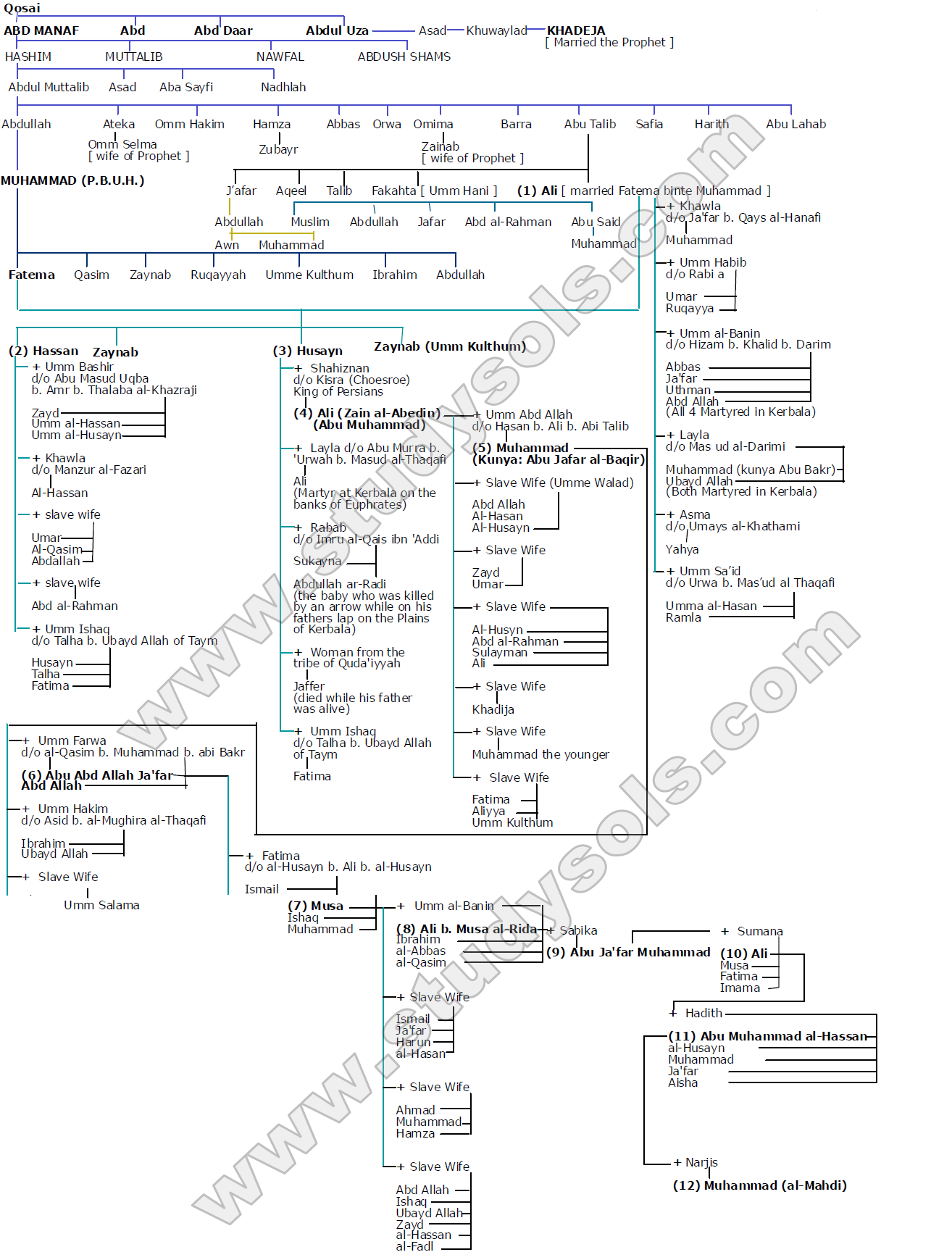 Imam Ali on the battlefield and Sword
The Battle of Badr:

This battle alone provides an adequate example of Ali’s courage, valor, and unmatched fighting skills. It is hardly an exaggeration to

say that he alone was responsible for the victory in that battle. This battle took place in themonth of Ramadan, 2 A.H., 624 A.D. About 1,000 Meccan Quraish warriors challenged some 313 illprepared and poorly equippedMuslims; the gross mismatch was obvious. In the ensuing battle, Imam Ali (A.S.) killed several famous Arab warriors, sending a wave of fear through the enemy ranks and dashing their hopes of victory. TheMeccan army retreated in shameful defeat. A total of 70 of the enemy soldiers had been killed and 36 of themhad fallen to Ali’s sword.

The Battle of Uhud:

The Battle of the Trench (Ahzab):

In the 5th year after Hijra, the Meccans returned with 10,000 soldiers, determined once and for all to wipe out Islam. The Holy Prophet (pbuh&p) ordered that a trench be dug around the camp of the Muslim army, in order to protect his small force of 2,000 fighters. In command of the Meccan army was Amr ibn Abdul-Wudh, a fierce and mighty warrior who was as renowned and feared in Arabia as equal to the great Persian warrior Rustum. He and several of his brave companions managed to jump their horses across the trench and challenged the Muslims to hand-tohand combat. One by one, Amr called out the names of some of the most well-known individuals and companions of the Prophet in the Muslim camp and challenged them to
duel, but they did not respond, being frozen by fear. Only ImamAli stood upwith thewill and resolve to accept Amr’s challenge. But the Holy Prophet (pbuh&p) did not allow him to fight. Finally, Amr taunted theMuslims collectively, and the Holy Prophet (pbuh&p) in particular, as cowards unwilling to put their faith to the test. He threw a spear directly at the tent of the Holy Prophet (pbuh&p) which pierced his tent. Ali was finally granted permission by the Holy Prophet (pbuh&p) to go out and fight Amr. The Holy Prophet (pbuh&p) declared, as he sent Ali out to fight, “Today, faith in embodiment is facing infidelity in embodiment.”Many of theMuslims, thinking thatAliwas nomatch forAmr, came out to look at Ali’s face for the last time. In the ensuing duel however, Ali killed Amr as well as two other renowned enemy warriors. The remaining oneswho had jumped the trench fled back to their own ranks. The Meccans besieged the Muslim camp for several days and finally retreated from the battlefield due to dwindling supplies, adverse weather, and low morale. Thus, it was Imam Ali alone who was responsible for demolishing the morale of the enemy and securing victory for the Muslim warriors.

The Battle of Khyber:

In the 7th year after Hijra, the Muslims marched against the rebellious Jewish clan which was holding the fortress of Khyber. On two successive days the Holy Prophet (pbuh&p) sent the Muslim army under the leadership of a different commander from among his Sahaba, but in both instances theMuslims came back defeated. Al-Bukhari and Muslim have recorded in their Sahih collections that on the eve before the third day of battle, the Holy Prophet (pbuh&p) announced, “Tomorrow, I shall give the standard (flag) of Islam to a man who loves Allah and His Messenger, and Allah and His Messenger love him.”He also added that it would be to the man “…who is brave, who would not show his back to the enemy, and would not return without success.”Every soldier in theMuslim army went to sleep that night pondering who that man would be, and  praying that the honor would be bestowed on him. The next morning, the Holy Prophet (pbuh&p) called for ImamAli, gave himthe standard of Islam, and sent the army out under his command. Ali fought and killed the mighty and dreaded warrior Mehrab, as well as several other highly reputed enemy warriors. He also broke open the door of the fortress single-handedly and flung it across themoat so that theMuslimarmy could enter and secure
the fortress. When Ali victoriously returned, theHoly Prophet (pbuh&p) embraced himand showered him with praises, including these words: “…Ali, you will be nearest to me on the Day of Judgment; you will be next to me at the Fountain of Kauthar; your blood is my
blood, your flesh is my flesh, your friendship is my friendship, and your enmity is my enmity; a war against you is a war against me!”
The Marriage of Hazrat Imam Ali. 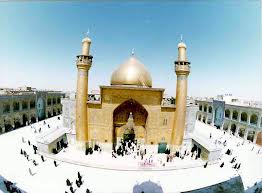 During his brief rule of about 6 years, Hazrath Ali had to deal with corruption, rebellion by his Governors and officials, and treachery by his own followers. He fought several wars to defend his principles and to maintain the integrity of the Muslim Empire. He died amartyr at the age of 63 on the 21st of themonth of Ramadan, 40 A.H., after being mortally wounded by a Kharijite while he was praying in the mosque at Kufa. His words when he was struck with the sword were: “I thank thee O’ Lord for rewarding me with martyrdom. How kind and Gracious of Thee. May ThyMercies furtherme to the Glory of Thy realm.”He was martyred by the Khwariji named Abd al-Rahman ibn Muljam at Kufa during the month of Ramadhan in the fortieth year of Hijrah and is buried in Najaf on the outskirts of Kufa.

Hazrat Ali  knowledge:
Prophet Muhammad (pbuh&p) said this about Imam Ali (A.S.): “I am the City of Knowledge, and Ali is the gate.” He also said: “Verily the Holy Qur’anis revealed on seven letters (levels) of which there is no letter which has not amanifest (exoteric)and a latent (esoteric) meaning, and verily Ali Ibne Abi Talib, with him is the (knowledge of) manifest and the latent (of it.)”Sahih al-Bukhari& Suyuti’s Itqaan. The above two Hadiths speak volumes about Ali’s knowledge.

Note: We have Collected All detailed information about Hazrat Imam Ali A.S and Struggle to Provide Exact information for Swab Purpose.If found any mistake in Typing or any other please inform us and Almighty Allah Forgive us. Thanks