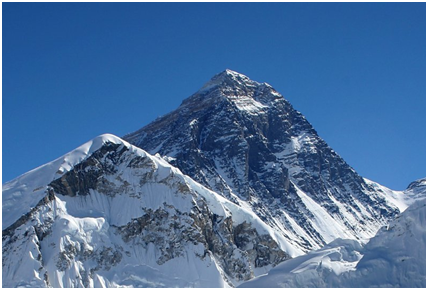 Mount Everest is the Earth’s highest mountain, with a peak at 29,029 ft above sea level. It is located in the Mahalangur section of the Himalayas. The international border between China and Nepal runs across the precise summit point. 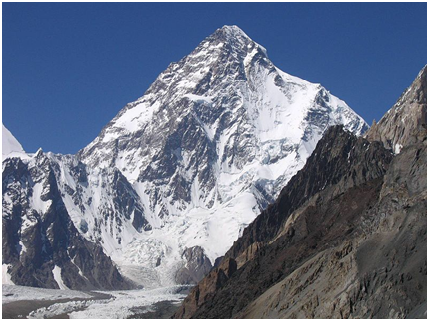 K2 (also known as Savage Mountain, Mountaineer’s Mountain, and Mount Godwin-Austen) is the second-highest mountain on Earth, after Mount Everest. With a peak elevation of 28,251 feet, K2 is part of the Karakoram Range, and is located on the border between Baltistan, in the Gilgit–Baltistan region of Pakistan, and the Xinjiang, China. It is more hazardous to reach K2 from the Chinese side; thus, it is mostly climbed from the Pakistani side. K2 is known as the Savage Mountain due to the difficulty of ascent and the second-highest fatality rate among the “eight thousanders” for those who climb it. For every four people who have reached the summit, one has died trying. 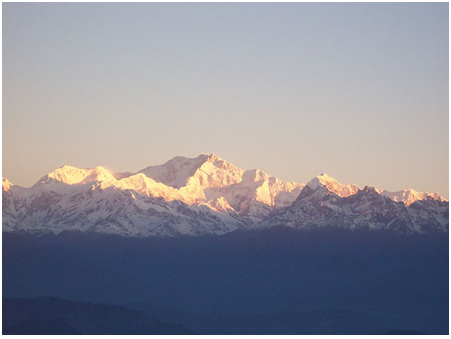 Kangchenjunga is the third highest mountain in the world, with an elevation of 28,169 ft and located along the India-Nepal border in the Himalayas. Kangchenjunga is also the name of the surrounding section of the Himalayas and means “The Five Treasures of Snows”, as it contains five peaks, four of them over 8,450 m (27,720 ft). The treasures represent the five repositories of God, which are gold, silver, gems, grain, and holy books. 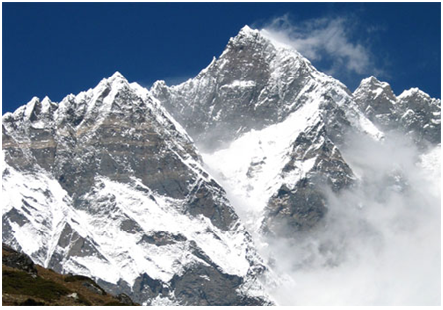 Lhotse is the fourth highest mountain on Earth (after Mount Everest, K2 and Kangchenjunga) and is connected to Everest via the South Col. In addition to the main summit at 27,940 ft above sea level, Lhotse Middle (East) is 27,605 ft and Lhotse Shar is 27,503 ft. It is located at the border between Tibet (China) and the Khumbu region of Nepal. Malaku is the fifth highest mountain in the world at 27,825 ft and is located 19 km (12 mi) southeast of Mount Everest, on the border between Nepal and China. One of the eight-thousanders, Makalu is an isolated peak whose shape is a four-sided pyramid. 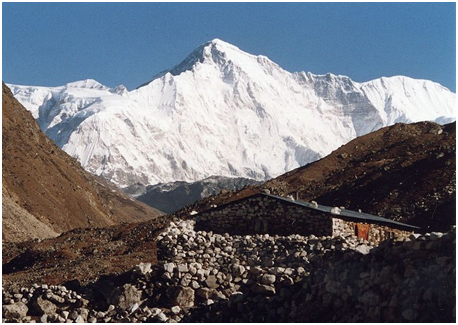 Cho Oyu is the sixth highest mountain in the world at 26,906 ft above sea level. Cho Oyu lies in the Himalayas and is 20 km west of Mount Everest, at the border between China and Nepal. Cho Oyu means “Turquoise Goddess” in Tibetan. 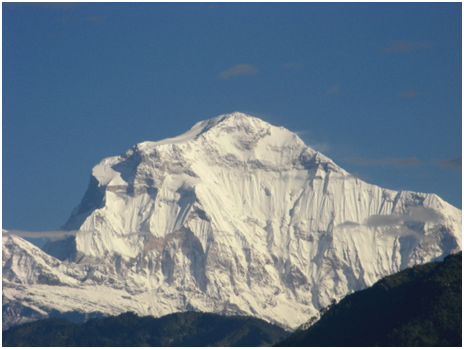 Dhaulagiri is the seventh highest mountain in the world at 26,795 ft and is one of fourteen over eight thousand meters. Dhaulagiri, which is in Nepal, was first climbed on May 13, 1960 by a Swiss/Austrian expedition. The mountain’s name is in Hindi and Nepali. 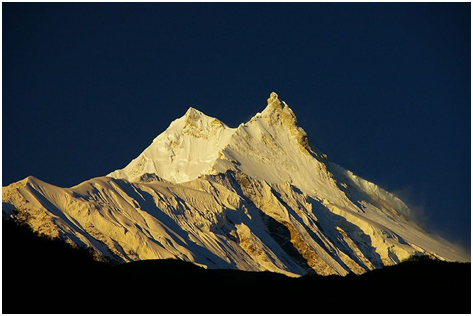 Manaslu also known as Kutang) is the eighth highest mountain in the world, and is located in the Mansiri Himal, part of the Nepalese Himalayas, in the west-central part of Nepal. Its name, which means “Mountain of the Spirit”, comes from the Sanskrit word Manasa, meaning “intellect” or “soul”. 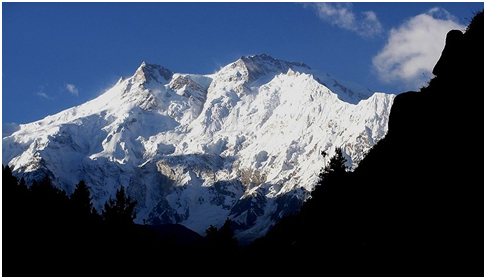 Nanga Parbat is the ninth highest mountain on Earth. Located in Pakistan, Nanga Parbat is one of the eight-thousanders, with a summit elevation of 26,660 ft. Nanga Parbat translates to “Naked Mountain” in English; also Known as the “Killer Mountain”, Nanga Parbat was one of the deadliest of the eight-thousanders for climbers in the first half of the twentieth century; since that time it has been less so, though still an extremely serious climb. It is also an immense, dramatic peak that rises far above its surrounding terrain. 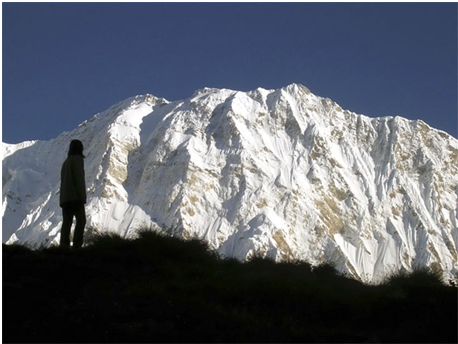 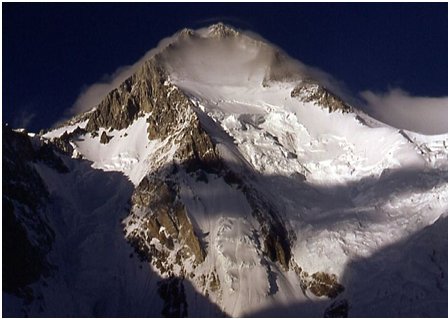 Gasherbrum I also known as Hidden Peak or K5, is the 11th highest peak on Earth, located on the Pakistani–Chinese border in Gilgit–Baltistan region of Pakistan and Xinjiang region of China. Gasherbrum I is part of the Gasherbrum massif, located in the Karakoram region of the Himalaya. Broad Peak also known as K3 is the 12th highest mountain on Earth, with an elevation of 26,414 ft. Broad Peak is part of the Gasherbrum massif on the border of Pakistan and China. It is located about 8 kilometres (5.0 mi) from K2. 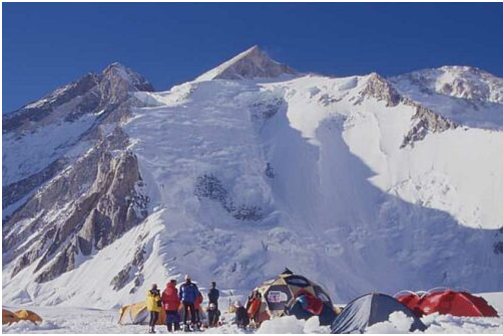 Gasherbrum II also known as K4, is the 13th highest mountain on Earth, located on the border of Gilgit–Baltistan province, Pakistan and Xinjiang, China. At 26,362 ft, Gasherbrum II is the third highest peak of the Gasherbrum massif, located in the Karakoram Range of the Himalaya. 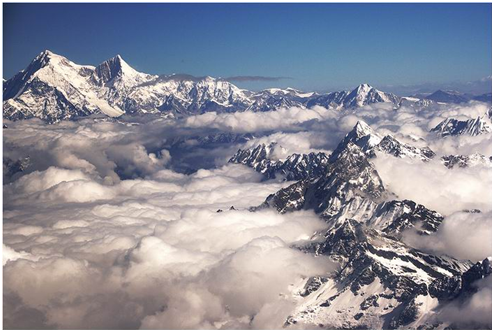 Shishapangma, also called Gosainth?n, is the fourteenth-highest mountain in the world and, at 26,289 ft, the lowest of the eight-thousanders. It was the last 8,000 metre peak to be climbed, due to its location entirely within Tibet and the restrictions on visits by foreigners to the region imposed by Tibetan and Chinese authorities. 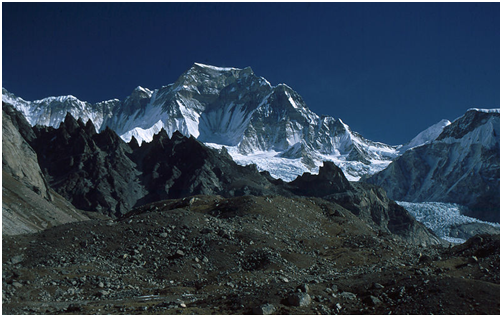 Gyachung Kang is a mountain in the Mahalangur Himal section of the Himalaya, and is the highest peak between Cho Oyu (8,201 m) and Mount Everest (8,848 m). It lies on the border between Nepal and China. As the fifteenth highest peak in the world, it is also the highest peak that is not an eight-thousander; hence it is far less well-known than the lowest of the eight-thousanders, which are only about 100 m (328 ft) higher.
This article is taken from Wikipedia source.