Facebook is going to provide Free Internet Facility in Undeveloped Countries. World has become a global village and but still there are some areas of the world where internet facility is not available to common man. Africa is a second largest continent of the world but it has still not become the member of virtual community. There was a need to help the African people in this regard. We mention here that Pakistan is also entered in the Underdeveloped countries. May soon Facebook soon announce the facility in Pakistan too? 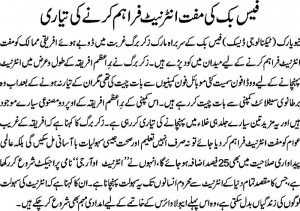 Mark Zuckerberg is negotiating with a British satellite company. The UK based company has its three satellite which are covering the continent of Africa after its more satellites are been provided to covering the whole underdeveloped countries of the World. The main focus of the project is that to provide education and health instructions to the Dark Continent of the underdeveloped countries. Officials also believe in that this will increase the production capacity of the whole world by the 25%.

Mark Zuckerberg rightly believes that internet can change the lives of the people. That’s why he is committed to expand this facility in the far flung areas of the world. He has already launched a campaign against Ebola. Internet.org has also launched a unique application for providing free internet to the people of underdeveloped countries.

For more about the exiting news on the Facebook Free Internet Facility please stay in touch here or consult with us, we will soon inform you about more launches by the officials of the Facebook. Queries on the related topic will be asked we will serve you.

Top 10 Richest Persons of Pakistan 2022 With Net worth