The greater investment of any nation is the Human Resource Development, Which enable the young generation to face the challenges of future. To achieve this objective, there is a need to provide a system of carefully designed and supervised education, enabling them to confidently face the challenges during the new millennium.

Cadet Colleges are special institutions which aim to produce student capable of leading the country and also act as skilled Army Offices. These institutions were primarily constructed by the then Pakistan government officials is accordance with the Public School of England. At the very beginning these were built in East Pakistan. The first fully fledged residential cadet college was built in Hasanabad, Punjab in 1954. Cadet colleges run on the direct supervision of the Armed Forces. 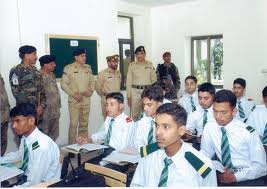 Cadet College Hasanabdal:
In the first Cadet College in Pakistan established in 1954 by the Government of the Punjab at the initiative of then the Commander in Chief, Pakistan Army, originally to serve as a feeder institution to the service academies.

Cadet College Jhelum:
Cadet College Jhelum is an established military prep school located in jhelum, Pakistan. The school is about 4 km from the prosperous city of Dina. The cadet college offers its students a choice of streams, offering Pakistani stream higher education as well as GCE O and A level Qualifications.

Cadet College Lahore:
Cadet College Lahore is an upcoming missionary institution launched with the prime objective to build the nation builders of tomorrow. In a era where discipline is wanting in every sphere of life and more so in education, the need for such institutions ever be on the increase.

Cadet College Kallar Kahar:
Cadet College Kallar kahar was set up in 1997 in a rural environment. The aim was to provide quality education to the boys and prepare them of the secondary and intermediate levelexam.The College enjoys the permanent affiliation with the board of Intermediate and Secondary Education (BISE) Rawalpindi.

Cadet College Murree:
Pakistan Cadet School and College an established military prep school located in Murre, a hill station town in the vicinity of the north Punjab, Pakistan. The main objective of the College is to prepare Cadets for Secondary and Intermediate Examination conducted by Federal Board of Intermediate and Secondary Education Islambad.